Overall Spelthorne achieved excellent results, despite the fact the competition seemed to be plagued by an abnormal number of errors across all clubs.
Coaches too were left bemused by the extent of the errors and inadequate conditions throughout the arena, with no understanding of what was causing it.

British Gymnastics clearly needs to consult with the coaches and fully re-appraise the organisation of this event.  Notwithstanding these problems, Spelthorne Gymnastics topped the medal table with a massive 5 gold medals, 1 silver and 1 bronze…and more importantly 5 new British Champions!

Competing over three days, each partnership completed two routines in the preliminaries, from which six competitors qualified to perform a third routine in the Finals.
Dan Axford & Carmen West [Mixed Pair 11-16] came through the preliminary stages in 3rd place but somehow managed to crash spectacularly in the Final dropping them to 5th place.
Harry Watson, Jake Turner, Jack Clegg & Bradley Gold [Men’s Four 12-18]  also came through the prelims in 2nd place and then performed a stunning routine in the Final to leapfrog themselves into the gold medal position. Sasha Carpenter and Poppy Yates continued their amazing form by leading through the preliminaries and comfortably taking the [Women’s Pairs 12-18] gold medal in the Final.  Ethan Law and Archie Collier [Men’s Pair 12-18] were too strong for the other competitors during the preliminary stages but an unusual error in the Final dropped them from gold to silver medal position, such a shame, but showing anything can happen.  Ruby Bird, Jolie Bulman and Ellie Simmons [Women’s Group 12-18] also came through the prelims in first place but then suffered an unenforced error in the Final dropping them to 4th.  Zemirah Dubery Coupe, Katie Blackford & Saskia Hobbs [Women’s Group 12-18] had only been together as a trio for a few months and performed well in the dynamic exercise but fell in the balance routine and failed to qualify for the Final.
Cameron Patrick-Lothian, Andrew Morris-Hunt, Max Crawford and Kieran Holbrook [Men’s Four 13-19] performed consistently throughout the competition and their new combined routine, performed to a montage of Queen hits, helped them win the hearts of the crowd and take the gold medal. Sophie Reynolds and Jack Lynch [Mixed Pair 13-19] had a shaky balance routine, but made up for it with their tempo routine securing them a place in the finals. The pair demonstrated a solid combine routine in the finals, even polishing the error in the preliminaries, but unfortunately with such a tough category they had to settle for Bronze.
Charlie Tate & Adam Upcott [Men’s Pair Senior] were placed 2nd throughout the preliminary stages but then showed their strength and depth by easily winning the Final.
Finally, Rhys Cowler & Mollie Jaggers [Mixed Pair Senior] had also been recently reunited as a mixed pair and were competing in the senior event for the first time.  They also came through the preliminary stages in 2nd place but then out-performed their rivals in the Final with some refreshingly new choreography to take the gold medal. 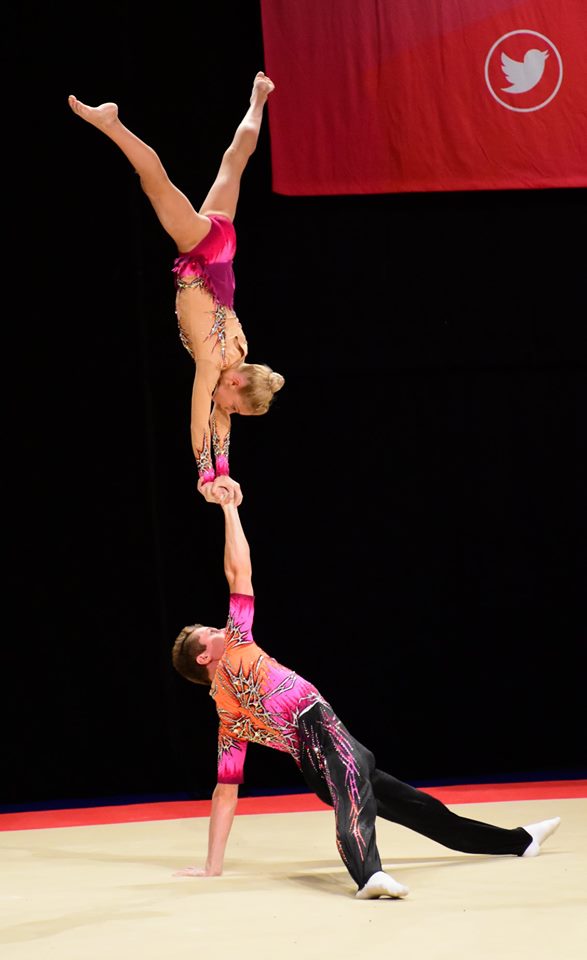 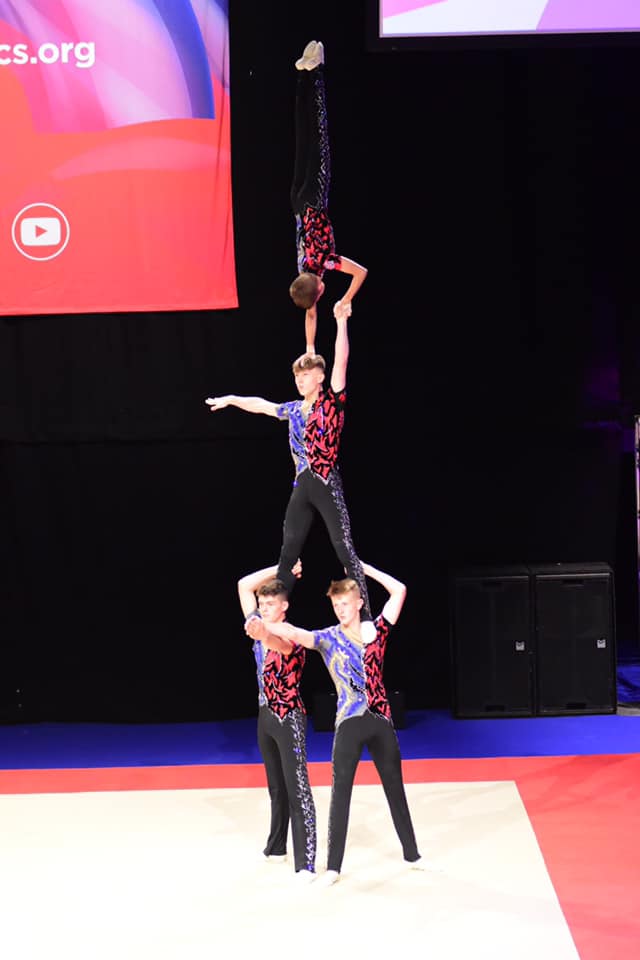 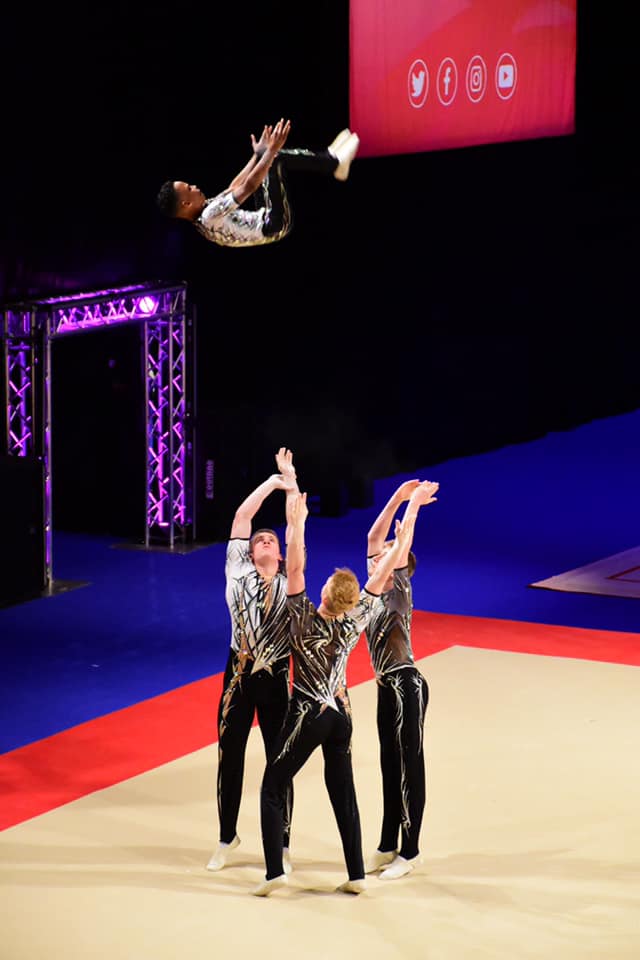 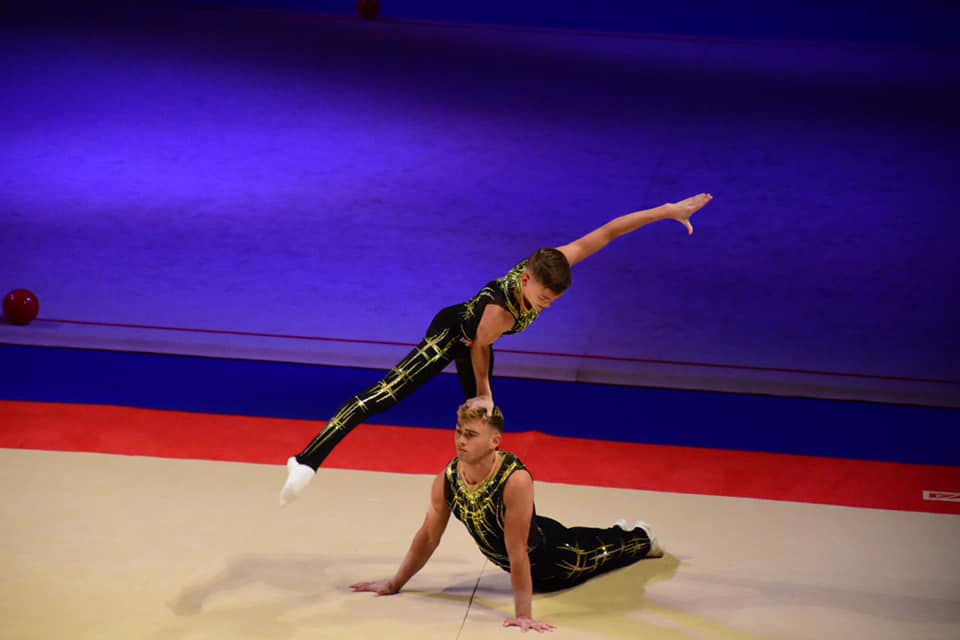 The event overall was a huge success with gymnasts, coaches and parents alike very proud of the performances.
Following the weekend of competition, it was announced that 6 partnerships from Spelthorne will represent GB at Europeans, an amazing achievement! Fingers crossed these results in more success at Europeans.

Once again a huge well done to all the gymnasts, coaches and choreographer (Adam McAssey, Keri Llewellyn and Ellie Cooper) whom have massively contributed to the success. I am sure the audience will agree, the performance level of Spelthorne’s routines are second to none. Quirky, captivating and emotional routines to win over the audience and judges.

A selection of videos from the final: