I know we said we wouldn’t, but we couldn’t resist. ..Gymnast of the month was supposed to be taking a summer break and returning in the new term, but seeing as the gym was still open and summer camps were running we thought we would honour all of our dedicated gymnasts and continue too.

As mentioned along with many others, this gymnast decided to dedicate some of her summer break to gymnastics by regularly attending our camps.. which definitely paid off. She learnt how to round back flic unsupported!

Because of this we thought Leah James should be awarded the “gymnast of the summer camp award!”

Congratulations Leah, we hope you had a great summer and managed to get a break from some gymnastics too!

We look forward to welcoming you all back in September and to finding our next gymnast of the month! 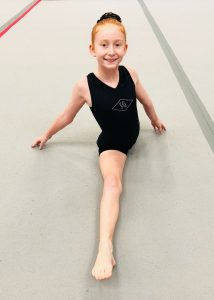