Last weekend our elite team headed to Portugal for a spot of sun and a lovely spring holiday… if only! No, they were ready to work hard and compete against other European teams at the Maia International Acro Cup, and World Cup. It was a smaller team this year, no youth groups competing, instead only our age groups, junior and senior categories. In total 26 gymnasts and a team of coaches ready to represent Spelthorne.
Maia is a competition we have attended for many consecutive years, and one our gymnasts particularly enjoy. The Portuguese always offering a warm welcome and a ton of support for our gymnasts. Although the gymnasts are performing difficult routines, the tension seems to disappear and instead a fun atmosphere surrounds the arena. All gymnasts from across Europe supporting each other year after year, forgetting they are about to compete against each other and instead show true sportsmanship and appreciation for one another. 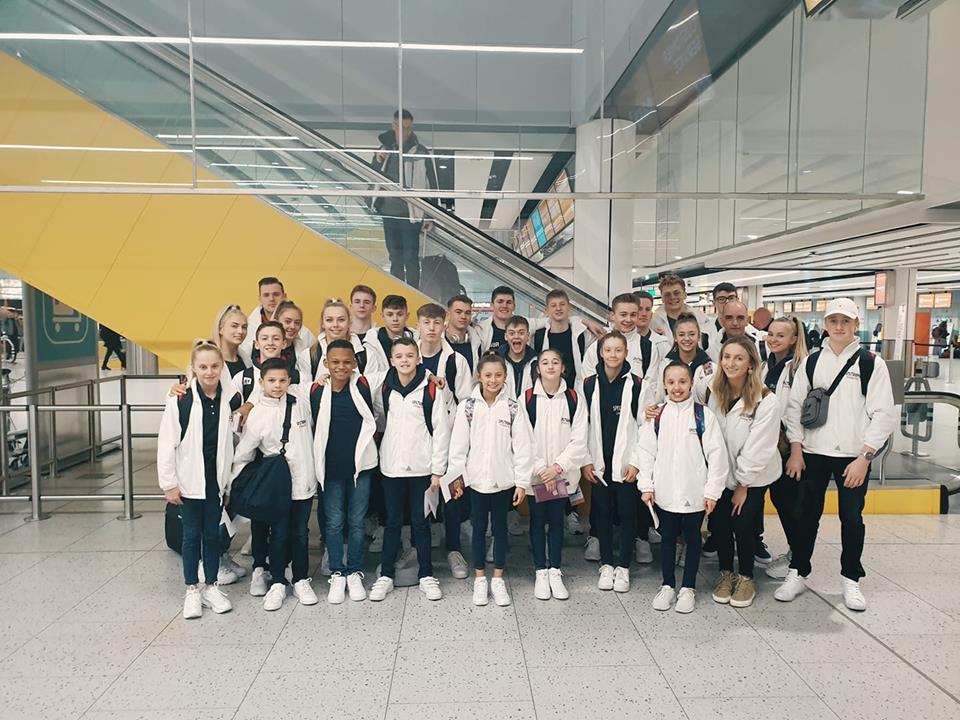 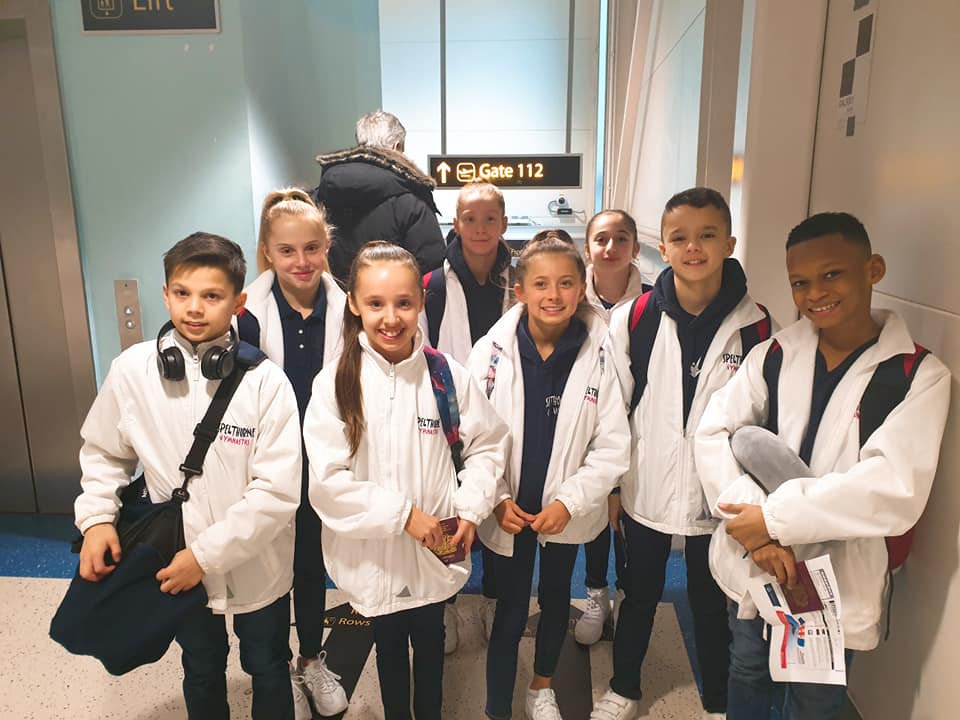 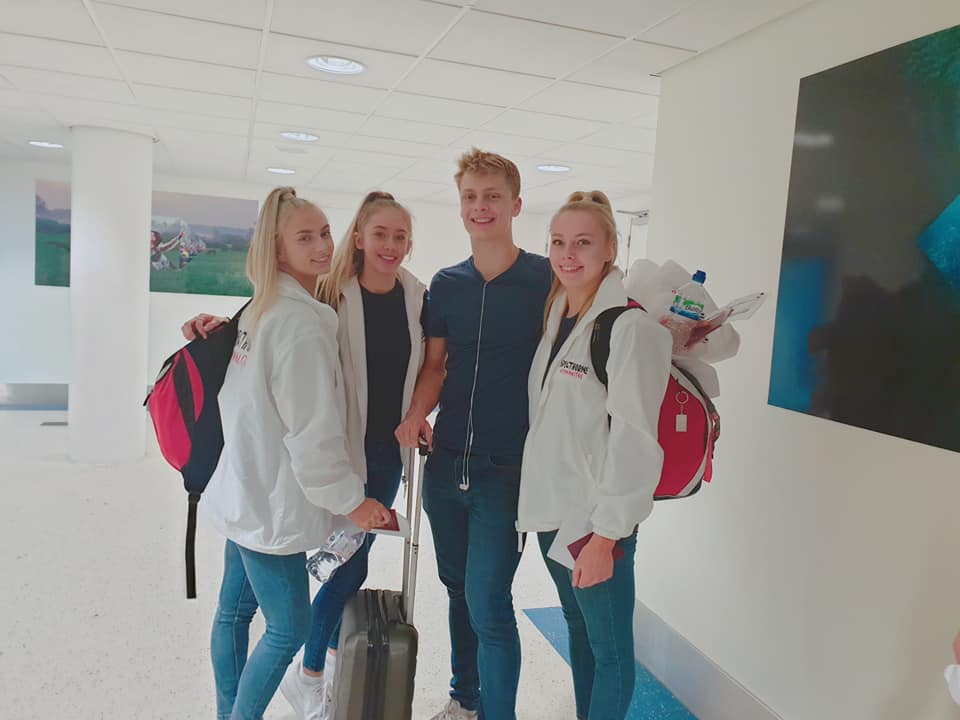 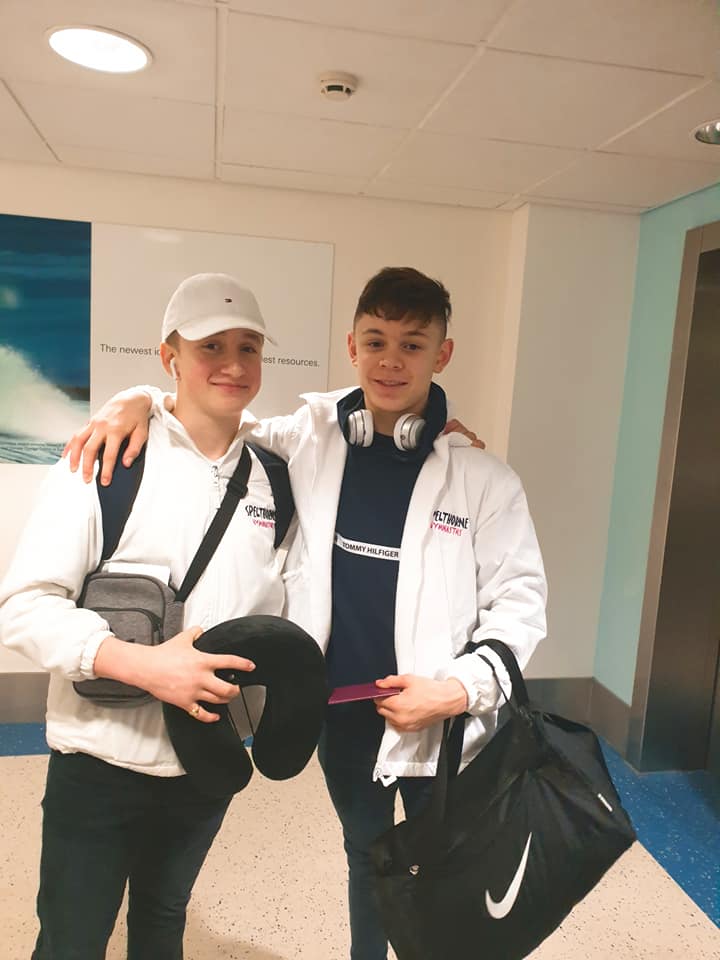 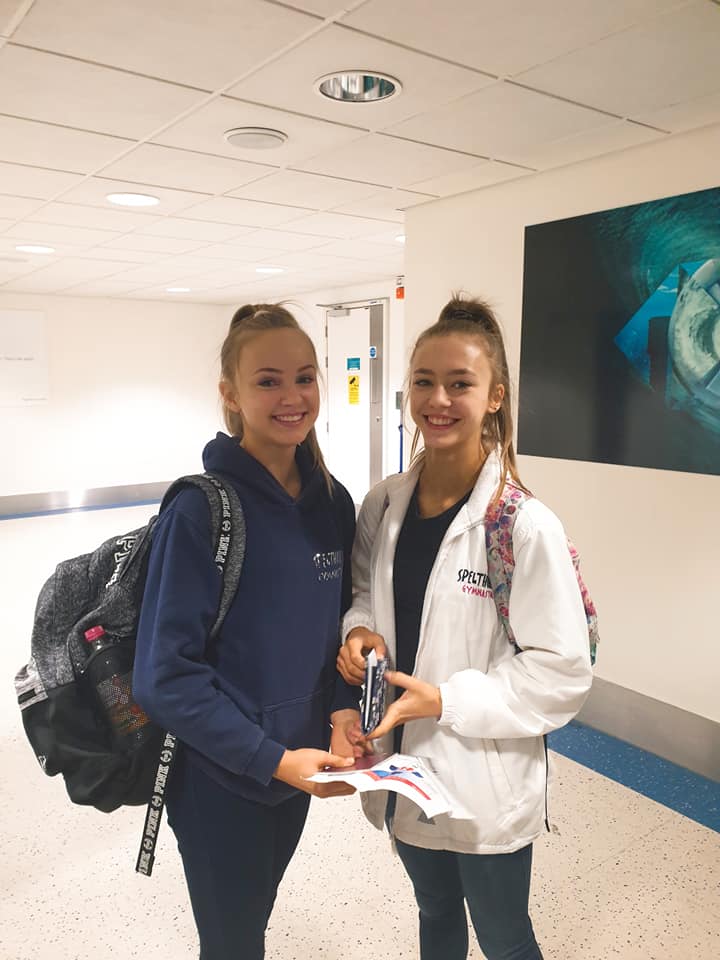 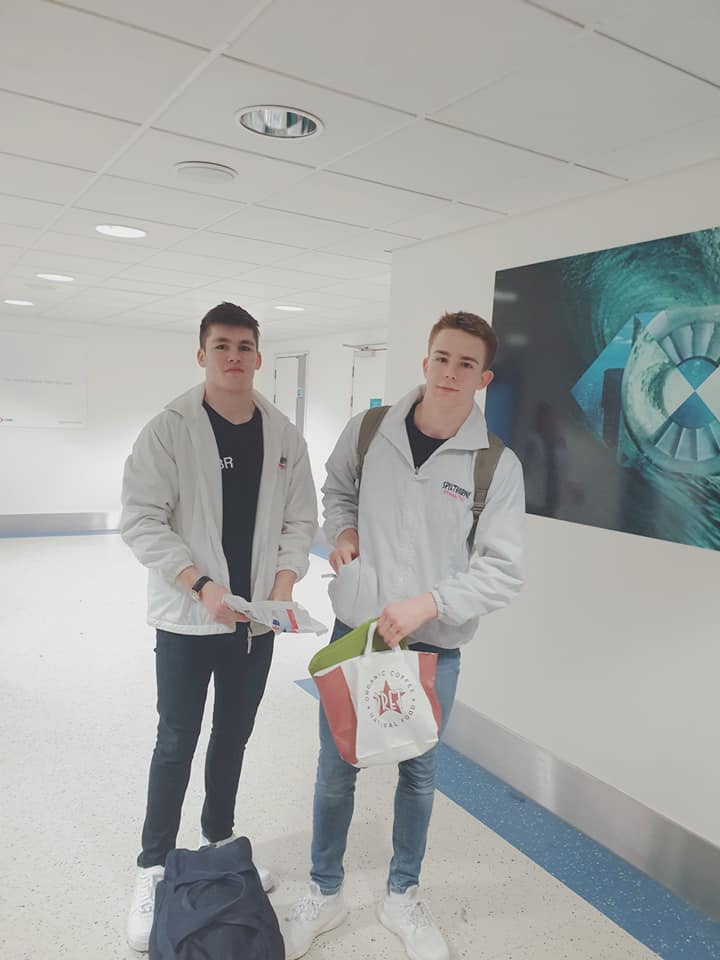 The gymnasts over 5 days trained and performed to the packed arena and across the live stream, where we were all at home cheering and supporting. The training sessions went well and the gymnasts were ready to compete in the qualification rounds to try and make it to finals.
The competition was a little bit wobbly in the qualifying rounds so they really had to prove themselves if they were to reach the finals. The scoring also, a little up and down leaving it all to play for. A perfect routine was the only way to secure a position in finals… the judges really not making it easy for our gymnasts. Maybe it is because they know they are talented and want to push them, so pick on every little detail to make them want to improve and ensure perfection.

Our new mixed pair, Dan and Carmen met a few difficulties in their first routine, however managed to pull it back in their second routine to secure a place in finals. 11-16 is always a tough category with a lot of entries, so for this newly formed partnership they had to state their presence and show they could also stand up against the others in the field. A clean and polished routine secured them a bronze medal, a great first international for these two… with a lot of promise still to come.

Some of our 12-18 gymnasts also had a few moments on the floor. Although they like to bring their game face, I think the nerves were kicking in.. having to face a new and more difficult age group and perform at their first international of the year. Of course you want to bring a perfect routine to show you mean business, but being exposed for the first time to those who you’ll be competing against for the rest of the season, seemed to bring the fear factor.

Our new partnership of Jolie, Ellie and Ruby had a great competition, performing clean routines, which the audience and judges loved. They had a tough category with Belgium and Kazakhstan being some of those testing them… however after balance and tempo they were sitting in first place, which they were able to maintain in finals, finishing with the gold medal!

Along with our women’s group our men’s pair also performed well. Another new partnership, Ethan and Archie. Two who are constantly improving, they held first place for both their balance and tempo routine.. and of course in finals also performed another clean routine securing another gold medal!

Our men’s group, a long standing partnership who have just moved up to a new age group also took to the floor. Bradley, Jack, Jake and Harry had a small deduction on their balance routine but pulled it back scoring higher on their tempo routine. Although there were no other competitors in their category they still had to perform clean and high scoring routines. Their combine routine doing just that… scoring higher than both routines in qualifications and earning them a gold medal.

Our final 12-18 competitors were our women’s pair. Two girls who always put themselves under a lot of pressure to constantly be on top. They are used to winning, which adds more pressure. Judges know what synchronicity these two have and the performance they bring, so have to pick on the smallest details to find deductions, pushing the girls to do better. Tempo was a good start for the girls on day one, sitting them in first place ..however with a slight wobble on day two in balance, the girls took a huge knock. No longer sitting in first they would have a lot to do if they were going to knock the other GB pair off the top spot. The girls had a huge gap to make up.. however an exciting combined routine, with polished moves and continued synchronicity pushed the girls back to the top. Gold for the girls again… but still improvements to be made if they want to stay on top this season and continue their reign of success.

Next up our 13-19 competitors… two of our partnerships were competing against injury, so the decision was made that they would compete only one routine. Instead of pushing them when not fully prepared, they were given a chance to compete and a chance to rest their bodies. At this level being technically prepared is important, we would prefer to compete one routine well then three under performing routines. Jack and Sophie competed their balance routine which scored highly and left them third on the leader board, before stepping back for the rest of the competition. Our newly formed women’s group also performed only one routine, their first routine together as a trio too. A clean tempo routine also leaving them in third after their one and only routine. Showing great potential, hopefully after having a bit more time to prepare they will be ready to compete all three routines at their next competition.

One partnership that did compete all three routines and showed dominance was our men’s group. Again a new age category and a new partnership, but ones who are showing huge potential and improvement… and it is still only March!
Just like our other men’s four, they may have been the only competitors in their category, but they performed solid and high scoring routines that would have been hard to beat. Gold for these four! 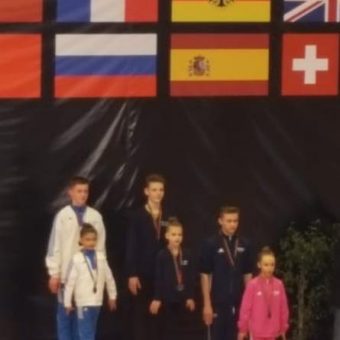 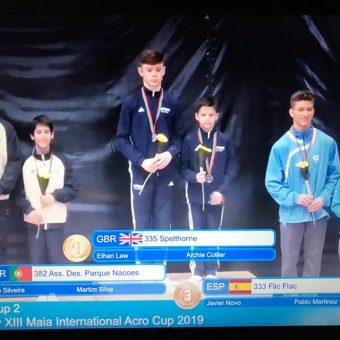 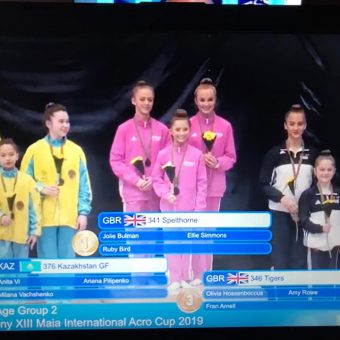 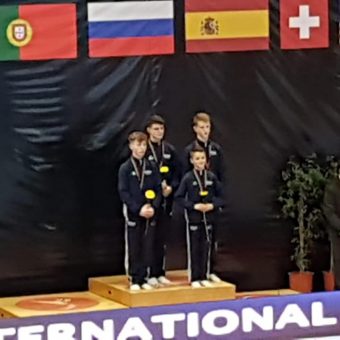 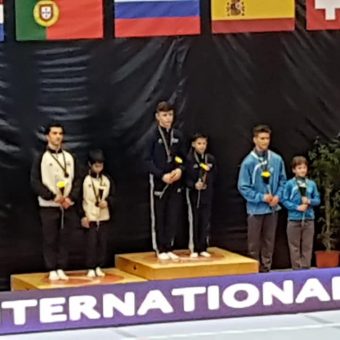 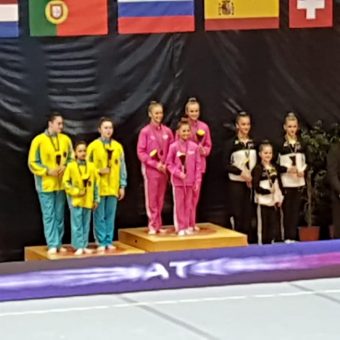 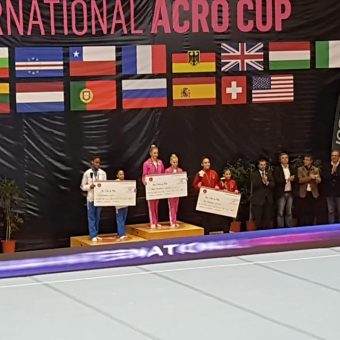 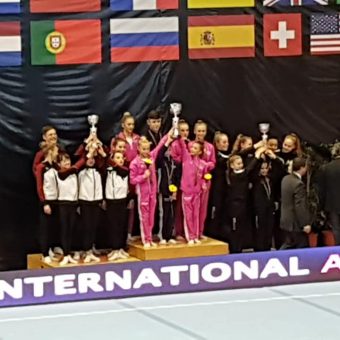 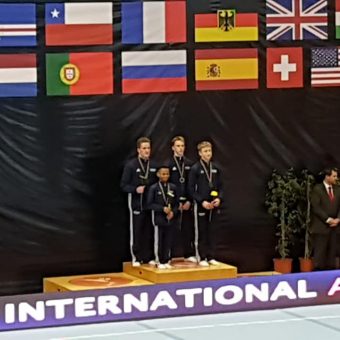 Alongside the International Acro Cup was the World Cup competition and our senior Men’s pair. Charlie and Adam came along to support and get in some training, but because of injury sat out of the competition… hoping to be ready and back to full strength soon. Instead it was left to our other senior men’s pair to represent Spelthorne as Seniors. After three clean routines previously at the Spelthorne Acro Cup, we were ready for a repeat performance. However a wobbly tempo routine showed just how hard it is at the top. With such difficulty in those routines you cannot take your eye off the ball… even with all the preparation, it comes down to the day and the moment. The boys however did still make it through to finals as they performed a clean and solid balance routine. Meaning they would have to put their nerves behind them on the final day. With competition from Russia, Germany and Azerbaijan among some, it was going to prove difficult for the boys. Although they have competed previously as a men’s pair, this was at age group level so to jump to the top is a huge ask. The transition in difficulty needless to say is like starting from scratch. However the boys performed well, looking like they had been competing as seniors for a lot longer than only a few months! They finished in 4th place and ended our time in Portugal with a bang! 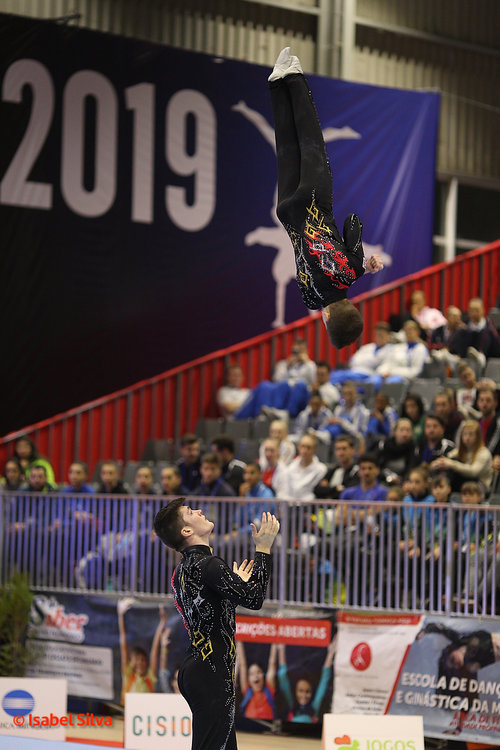 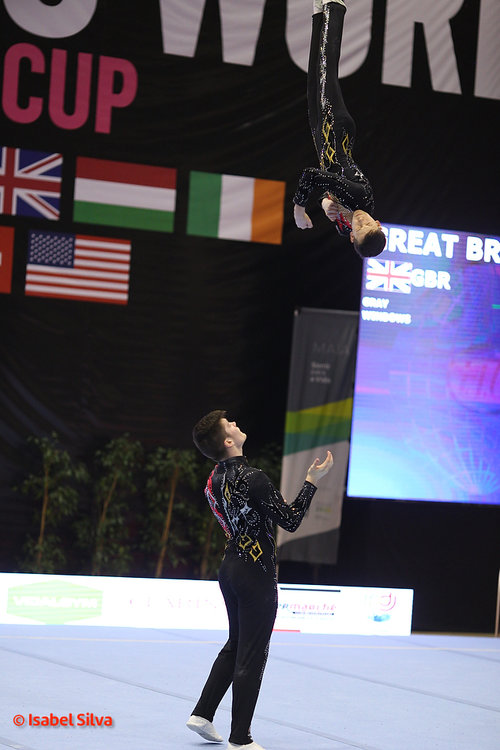