As you already know the fundraising team are always behind the scenes supporting the club. Not only with raising money but giving their time at events, such as the displays we have just had. They are busy not only on the night, but just like the coaches and gymnasts, weeks and months before preparing to make things happen.

The fundraising team runs efficiently and has been very successful in raising considerable amounts of funds for the gymnasts. The team have had the support of a fab chairman leading the team for many years. The job of a fundraiser, and in particular that of a chairman, is very demanding and we could be oblivious to what their role actually demands. Mike has been the chairman now for 33 shows- working and preparing not just for the shows, but events and fundraising that take place throughout the year. Helping to find sponsors for the club, managing donations received and working with the team to evenly distribute donations to help and support as many gymnasts as possible. Mike is always busy thinking of new ways to raise money for the gym, he chairs regular meetings, as well as the annual AGM meeting. Mike has been very successful in his role and we are very grateful for all of the help and support he has shown to Spelthorne Gymnastics over the years.

Mike, (with the backing of the team) now feels it is time he stepped aside and handed over the reigns of fundraising to someone new. Therefore we are happy to announce Nigel Clegg as the new chairman, (with Mike being there to shadow and support Nigel, we are sure he will provide as much success to the team as Mike has over the years). Thank you Mike and Good Luck Nigel!!  ? 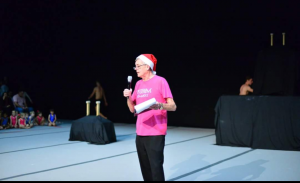